The diamond-inspired watch comes that has a semi-transparent “jelly” model with colorful details and amazing features. It’s the stylish watch that doesn’t compromise on the functions nor performance. 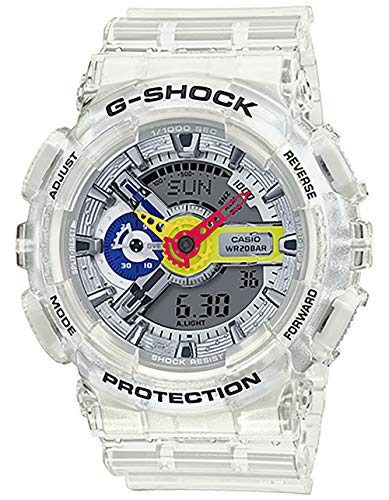 If you fancy a nice watch that handles a fall and takes use in the most challenging situations, a Casio G-shock is one great choice for you.

Don’t know much about Casio G-Shock?

If you think you were determined, think twice. The Casio engineer needed no less than 200 prototypes until he got it right!

Briefly, the Casio G-shock is designed to withstand vibration and mechanical shock (its name does come from “gravitational shock”). A Casio G-shock watches addresses to sports, military and outdoorsy type of customer. However, anyone can wear one.

Most of the G-Shock watches are digital, but some models present a combination of digital and analogue.

What are the common features for G-Shock watches? All watches in G-Shock line come with stopwatch function, water resistance, countdown timer and an electroluminescent backlight. The shock-resistant design presents 10 layers that offer protection for the quartz timekeeping module. The list continues with stainless steel, hardened mineral glass watch crystal, and floating module. Most models come with urethane rubber bumper and stainless screw down case back, whereas the LCD module is attached with flexible cables.

It was the end of November 2018 when Casio Computer Co., Ltd announced the release of the GA-110 Ferg.

The new model is the result of a great collaboration between Casio G-Shock and the well-known hip hop artist A$AP Ferg. The New-York-based hip hop collective A$AP Ferg absolutely loves G-Shock and even performed at the G-Shock 35th Anniversary Celebration in New York a while ago. This new model is based on the world-wide popular GA-110, featuring a clear transparent resin body and band. The blue, red, and yellow details on the face made this model stand out from the crowd. The new special model does include the creative take of A$AP Ferg.

The back cover is impressed with the Ferg logo, whereas the band ring features the logo in green. This is truly a tough, yet fashionably cool appearance for a watch.

The watch has many details that turn it into one special model for the stylish customer out there. The LED lights make the watch glow in the dark, whereas the clasps see the artist’s logo in green. On top of everything else, it comes in a jewellery box. The box is a bright red on the outside and yellow velvet on the inside. It definitely completes the look of the watch.

All in all, the GA-110 A$AP Ferg is a collaboration model that combines the creative genius of a beloved hip hop artist with the unique toughness of G-Shock in the most perfect way.

The famous hip-hop artist charted a lot in the past 5 years. He hit the market with the hip=hop crop with A$SAP Mob, releasing two solo albums afterwards. The most recent release Still Striving in August 2017 proved once again his talent. It was a reflection of his artistic path, exploring new and amazing styles and soundscapes. As a matter of fact, the single “Plain Jane” went double platinum in the US, putting Ferg on the map of the mainstream for good. A high profile appearance with ADIDAS, his Mad Man Tour all over North America are only a few to name about his prodigious life. The model is no different from most Casio G-Shock models in terms of main features. It’s shock resistant and magnetic resistant too. It’s water resistant up to 6t6 ft. and comes with LED light. The case and bezel material is resin and the watch comes with mineral glass. It features auto light switch and illumination duration that you can select, according to your needs (1.5 seconds or 3 seconds). It also comes with the Afterglow feature, which makes it great for the dim light conditions.

You may use one of the measuring modes (lap time, split time, elapsed time) and countdown timer as well. the measuring unit for the countdown is 1 second and the range is 24 hours. The watch also includes an Auto-repeat function. You may set 5 daily alarms (with 1 snooze alarm).

The watch comes with Full auto-calendar (to the year 2099) and hourly time signal. It features both 12 and 24-hour format and its accuracy is impressive: +/- 15 seconds per month.

It includes an analogue display with two hands for an hour and minute (hand moves every 20 seconds). It also has a digital display for hour, minute, second, pm, month, date and day.

The CR1220 battery has a 2-year life and the LED is Amber, which makes it stand out even more.

For one thing, some may find the Amber on the LED a bit surprising. Even though it’s not a downside, you may have to consider it when buying.

One with smaller wrist may find the bracelet a bit large as well.

If you’re going for a subtle look, maybe you want to give it a second thought as the GA-110 A$AP Ferg is anything but subtle.

Whenever you want to impress with a watch that takes a fall and even some raindrops, take the leap of faith with this one. It even looks better in person!