John V. May 14, 2019 Other Reviews
Check Out Pricing and Reviews on Amazon
Nixon Mission SS- The Elegant Watch for Your Outdoor Experiences Review
The new Mission Stainless Steel smartwatch from Nixon that impresses with the functions and doesn’t disappoint with its looks. The classy feel combines excellently with the rugged build and new era functions, turning into a great competitor on the smartwatches market.
John V.
5 Total Score
Who says that outdoor watches cannot be elegant?

The new Mission Stainless Steel smartwatch from Nixon that impresses with the functions and doesn’t disappoint with its looks. The classy feel combines excellently with the rugged build and new era functions, turning into a great competitor on the smartwatches market. 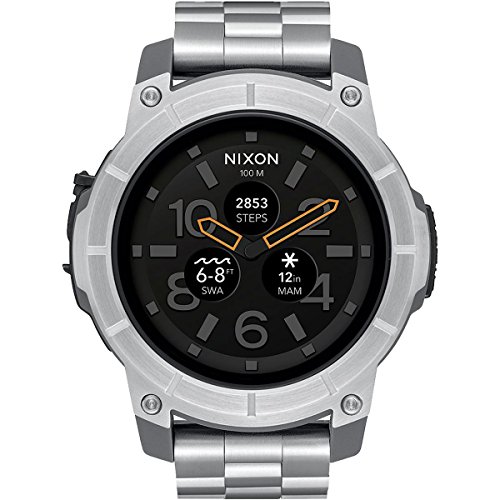 Gone are the days when you had to choose between rugged or elegant watches. These are the days when a watch can be robust and able to take the outdoor challenges, without sacrificing its looks. You can now get watches that look elegant and classy only to discover that their build and functions recommend them for outdoor activities.

Founded in 1997, Nixon is an American watches, audio and accessories brand that addresses the youth style market.

Thanks to its style and affordable prices, Nixon has become a favorite brand among youngsters out there soon enough, and it’s currently sold in 80 countries around the world. Back in 2016, the original Mission made quite an impression, even though the series did come with some inherent flaws. For instance, the 2016 Mission went with a silicone band that didn’t look that bad, but it did disappoint on some level.

The new Nixon Mission in a nutshell.

Even though the plastic polycarbonate body of the original Mission smartwatch didn’t look that bad, we do have to admit that the new stainless steel appearance does make a better first impression. After the first glance you realize that it’s not a regular watch, but a smartwatch instead.

The winter warriors and the summer lovers Californians are going to fancy the new Nixon Mission SS. The watch gives them what they need for the ski or surf, and it’s self-sufficient in GPS and includes many exciting functions.

One thing to notice is that the new Mission SS isn’t exactly an ordinary smartwatch, even though it does come with all the functions Android 2.0 presents. It’s just like wearing a suit when you go grocery shopping.

How does the detailed look? When it comes to functions, the new Mission SS isn’t that far from the original model, which isn’t such sad news since the first model impressed with the features anyway.

The new Mission SS comes with 10ATM water resistance, and the Nixon’s particular MisLock shock resistant polycarbonate case protects it from knocks and bumps. The Corning Gorilla Glass coating on the screen is going to protect against the scratches.

When it comes to protection against shock or scratches, the new Mission SS stands out as it comes with additional stainless steel “roll cage” bumper.

Running on Android Wear 2.0 and coming with Qualcomm’s Snapdragon 2100 processor, which was designed specifically for the wearable devices, inside the casing. The watch is compatible with both iOS and Android devices. It’s powered by Wear OS by Google and runs on the latest Wear OS by Google software with new functions for the iPhone users. It also syncs with Surfine (the most impressive source for surf conditions reporting) and Snocountry (it’s the real deal when it comes to mountain conditions for alerts to your wrist).

The new Mission SS comes with more and more various sensors when compared with the original model. It includes a thermometer, Bluetooth, barometer, altimeter, gyro, e-compass, accelerometer, and many humidity sensors. However, it still doesn’t include a heart-rate monitor, which counts as a downside for many.

You can use Nixon’s Mission app for obtaining real-time snow and surf conditions. You can also keep an eye on the sessions on the slopes/water using the Nixon Trace app.

The watch supports both Wi-Fi and Bluetooth and provides 4GB storage, 512 MB of RAM.

The rugged image is sustained by the stainless steel bands that come in three colors (black, silver and gold). The bands feature sturdy stainless steel double locking clasps, which take the wear for a long time. The micro adjustments are going to allow you to find the right fit for the band on your wrist.

The AMOLED with Ambient Light Sensor makes the watch easy to read. The touch screen includes Multi-Touch and wet finger technology, which improves its functionality and versatility.

The New Mission SS comes with a 10ATM custom injection molded fiber reinforced polycarbonate case, patented Mic-Lock, single polycarbonate pusher, and screw on case back and screws pin lugs. All of these details recommend it for outdoor use.

Is it difficult to use? The AMOLED screen is round, and it’s easy to read. If you know something about Android Watch 2.0, the Nixon Mission’s SS interface is going to look familiar. You may get your notifications by flicking it up, whereas flicking it down is going to allow you to access the settings. Press gently on the side button for taking a look at all the apps. Flick it to the right and select one of the many available watch faces.

In all fairness, everything is intuitive and straightforward about the watch, which gives you access to Google Maps, Google Play Music, Google Fit. The clock runs nice and smooth, and you only may run into some niggles on the cause of the software and not the hardware.

You need a phone running Android 4.3+ or iOS8.2+ to get the best out of the watch. Keep in mind that the supported features can vary between platforms.

Even if the Mission Nixon SS is all about the fitness, it doesn’t mean you can use it for all sorts of sports activities. It’s an excellent choice for surfing or skiing, but it may not be the ideal option for running as it doesn’t include a heart rate function.

Besides, the magnetic battery charger could use some improvement as the battery doesn’t last as much as you’d expect.

The Nixon Mission SS is one of the most well-built smartwatches at the moment. It’s bulky, impressive and ready for some intense action.

Even though its looks combine great with the fantastic features, the battery is a bit disappointing if you’re into the classy, rugged and reliable smartwatches that deliver while skiing or surfing, the new Nixon Mission SS is one option to try.

Nixon launches the Mission SS, the super-tough smartwatch gets